The hand painted picture book Sense of Belonging is the visual outcome of my thesis Representing Sense of Place. Both I developed during my master program Information Design at the Design Academy Eindhoven in 2016.
‍
After initially researching the two-way influence between man and place, I created an analytical model charting how history, personal experiences and emotions charge a place with meaning. The model further facilitated my research on changes over time and the sense of community across a particular region.

The 150-year history of the Dutch town of Oranje in Drenthe, The Netherlands was a source of inspiration while developing the model.

Within each period of great change I then centralised one person. Their connections with the surrounding and community I then visualised in a series of paintings.

The results (analytical model, paintings) were presented during the Dutch Design Week 2016.
‍‍ 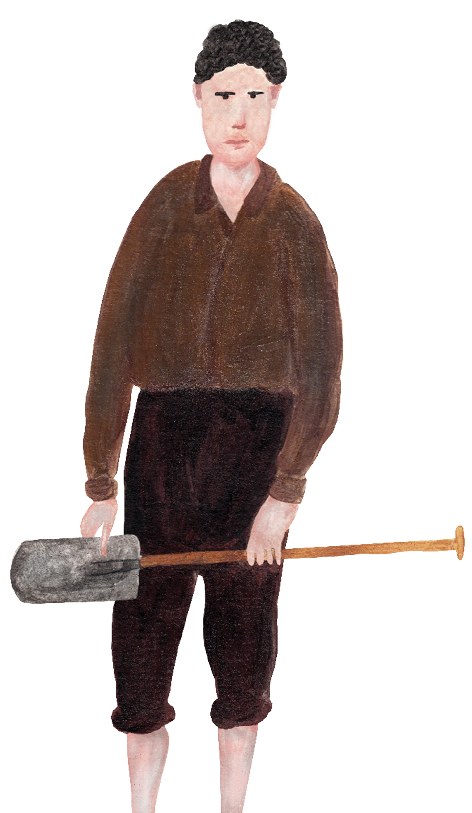 In the North-Eastern part of The Netherlands, Drenthe, many strong man were needed to help dig a canal. Hugo travelled up there hoping to earn some money. When he arrived he found extensive open heather fields, with here and there some sod houses and poor wooden barracks. One of these became his home for the time being, shared with other canal diggers that also had arrived from far.

Each day Hugo worked with his bare feet in the mud. The task was tough, the clay unpredictable and the canal progressed slowly while the long days passed by. Even though Hugo was tired and his body sore, he kept on working. After eight months and 1300 meters of digging, the canal officially was named the ‘Oranje Canal’, in honour of King William III. But for Hugo it would always stay nameless, he had already left months before.
‍ 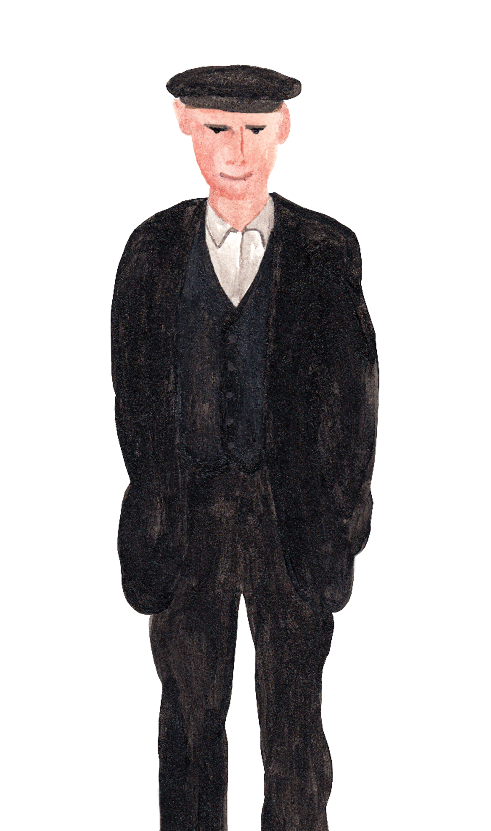 From his home, Feitze can see the ships full of potatoes passing by his window. They are on their way to the potato flour factory, just a little further along the canal, where Feitze is a factory worker. And so are all of Feitze’s neighbours. The factory provided Feitze with a well-built house made out of white brick walls and clay roof tiles. Similar to all his neighbours. Over the years Feitze’s family grew. And so were the families of his neighbours.

Together, the factory workers families and the surrounding potato farmers formed a strong community. They are the roots of the little village of Oranje. Step by step the village grew and met with all their basic needs. A local grocery store for the wives, a local elementary school for the kids, and a cafe for the men to unwind from long working days. Feitze’s identity is Oranje, Oranje is his identity.
‍ 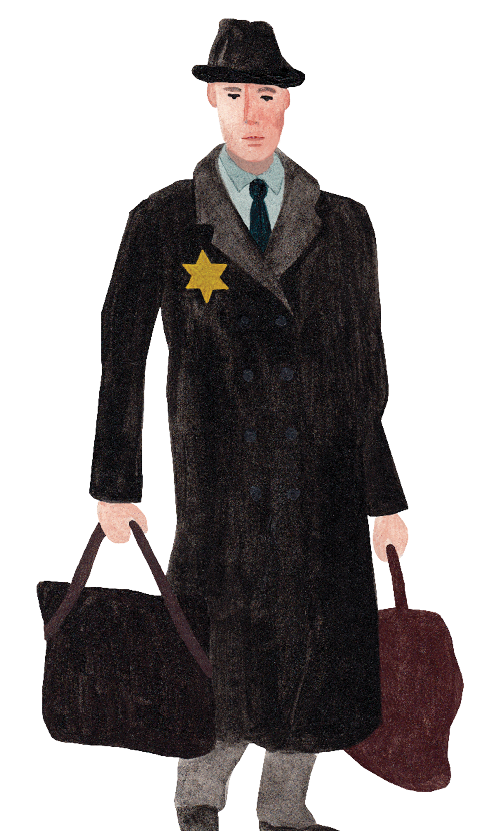 One day during the German occupation in World War II, Levie received the ‘request’ to travel to Camp Oranje. He left his beloved family behind and arrived with 79 other Jewish men.

They slept in a converted barn in the middle of Oranje’s potato factory fields. Every day Levie had to work long hours in the fields while performing physical hard labor. Levie was not build for this kind of work and couldn’t believe the hard working mentality of the locals.

The watery porridge for breakfast and a couple of bare buns during the day didn’t help him to gain the needed strength.

Every night, when Levie laid his body to rest on the primitive bunkbed, he felt a little weaker than the day before. Every night, his uncertainty grew. How much longer would he be kept here? How many more nights before he would be reunited with his wife and children?
‍

During my thesis I conducted research on the two-way influence between man and place. We are actively creating places and, at the same time, these places are influencing how and who we are. In that sense, place place is much more than architecture or geographical location – it is also largely defined by people and history.

In search for methods to map the subjective qualities of a place I developed an analytical model charting how history, personal experiences and emotions charge a place with meaning. The model was applied on the tiny Dutch town Oranje. 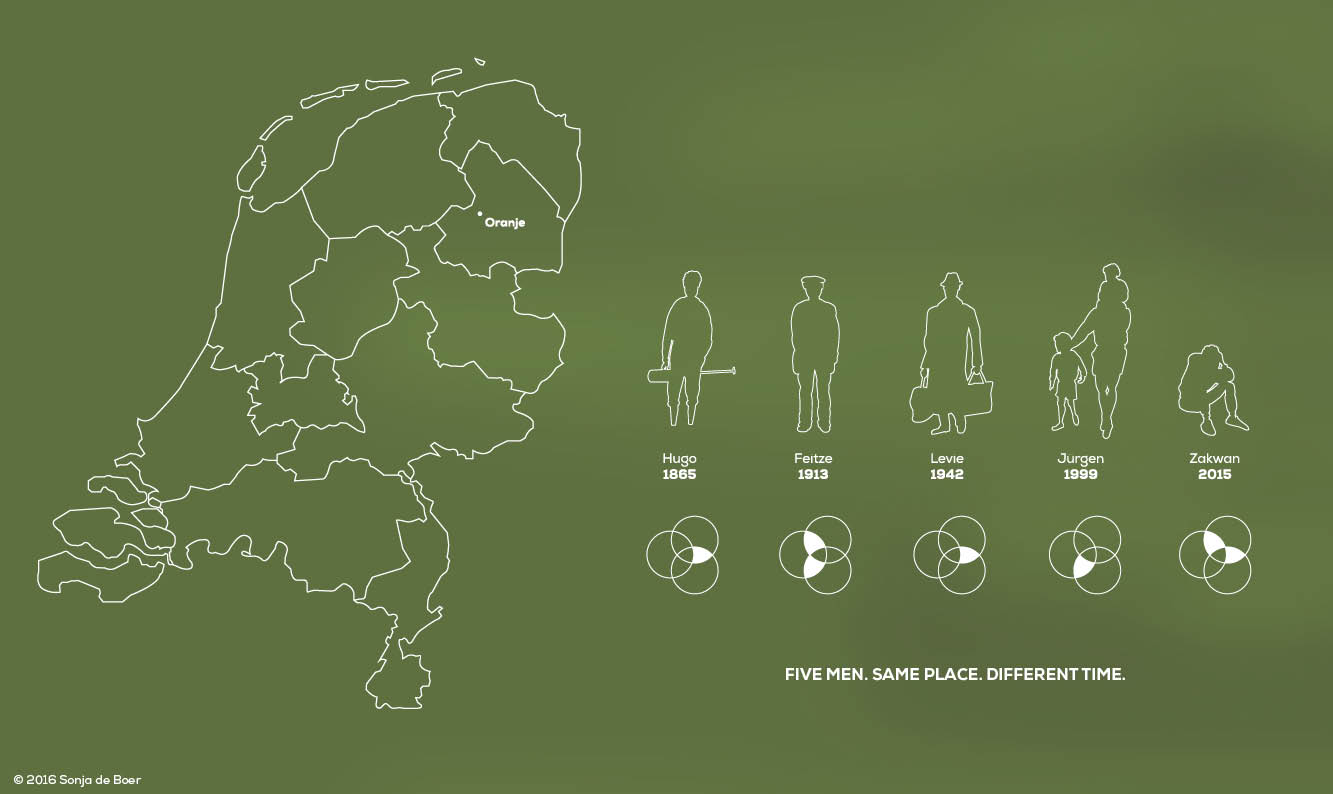 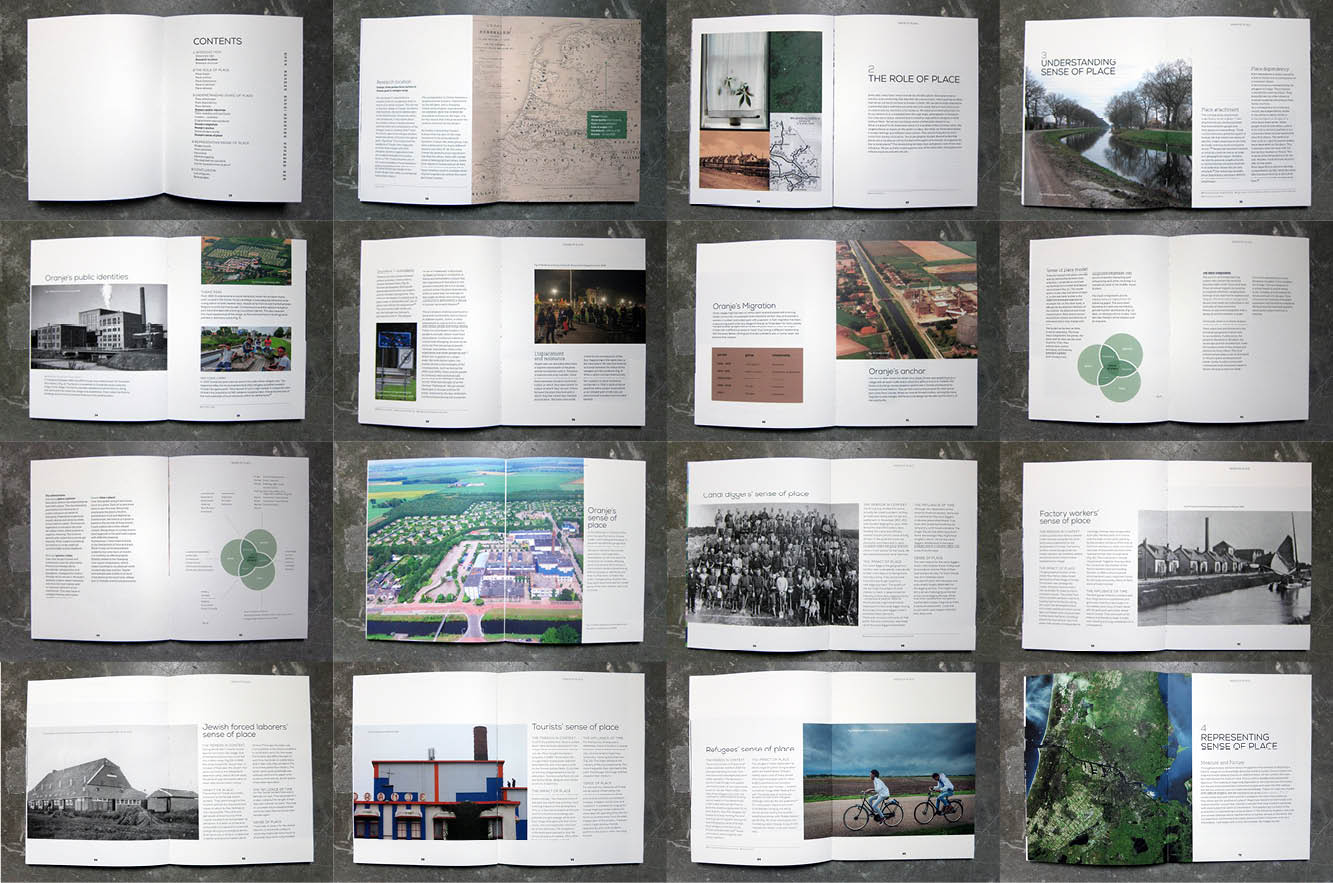 The Sense of Belonging research and accompanying picture book were presented during the Dutch Design Week 2016 at De Witte Dame building in Eindhoven.‍ 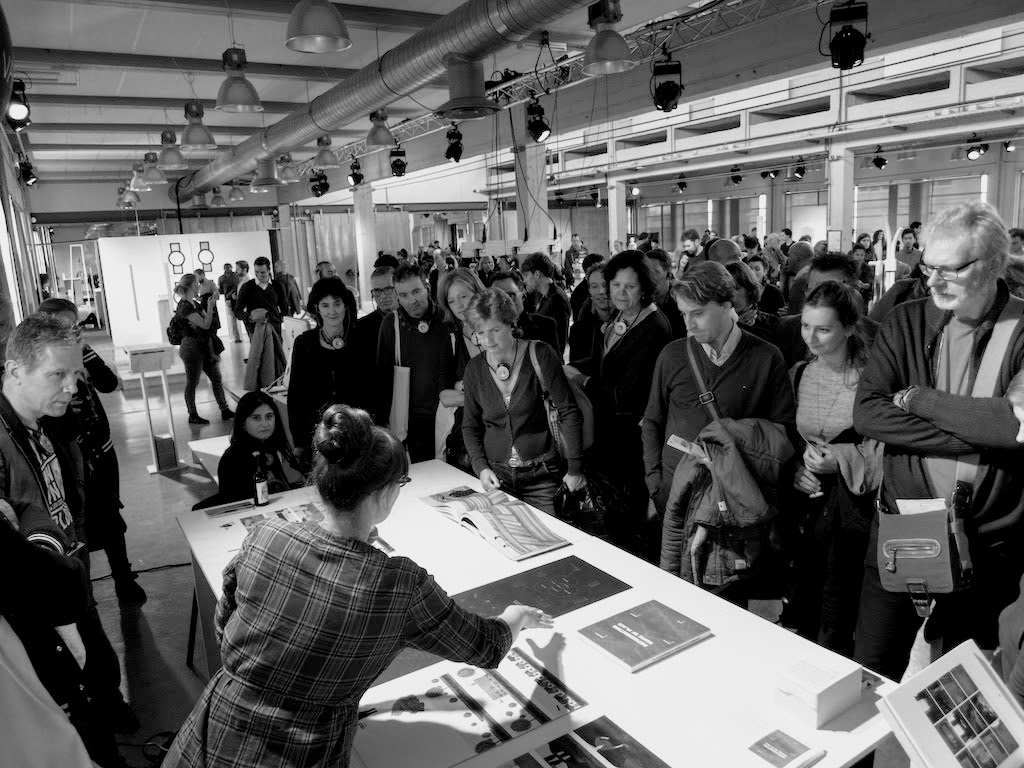 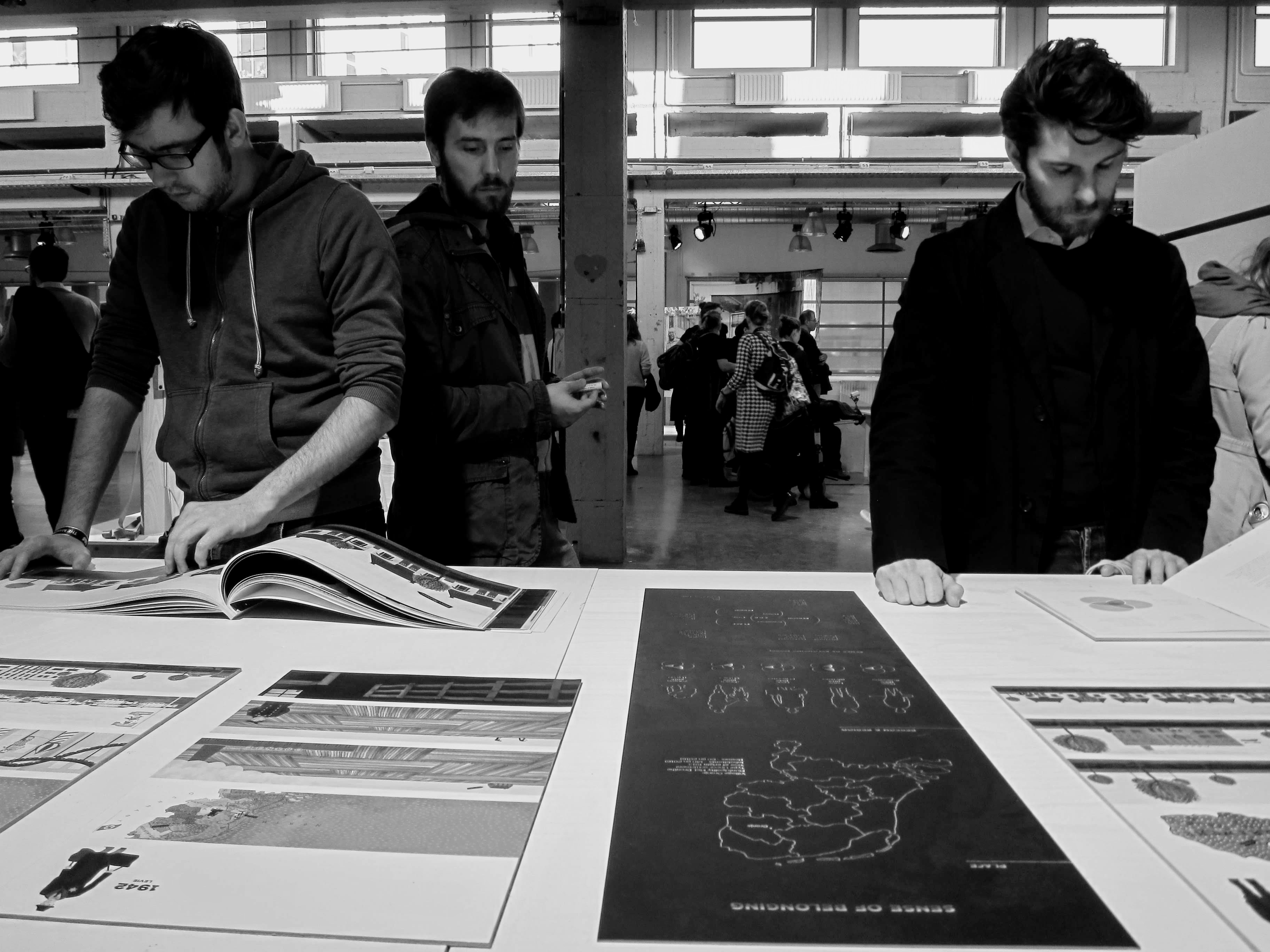 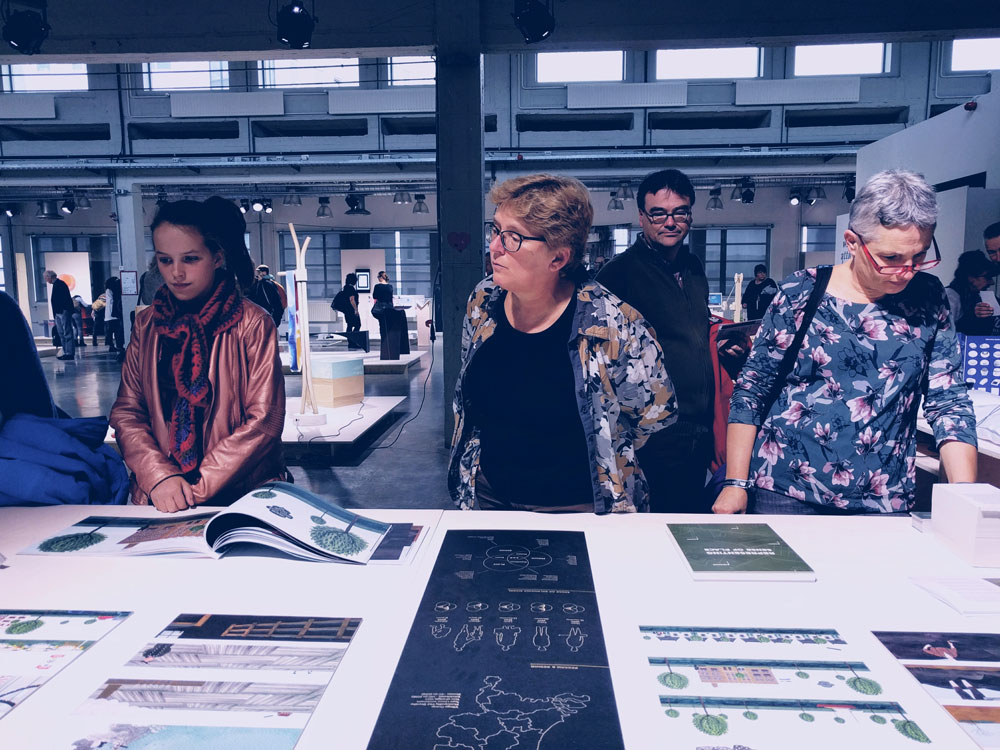